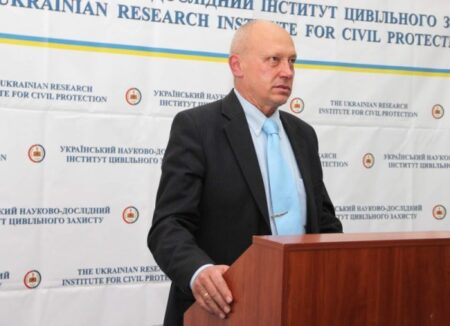 Oleksandr Shmereho, the Head of the Department for Research in Life Safety, Fire Technical and Electrical Engineering Research of KFI, congratulated Cherkasy Institute of Fire Safety named after Chornobyl Heroes of National University of Civil Defense of Ukraine on the 45th anniversary.

Representatives of foreign ministries were among the guests as well as colleagues from the Republic of Poland, the Slovak Republic and Georgia which expressed their congratulations at the event.

In his congratulatory speech, Oleksandr Shmereho, the representative of KFI, and concurrently also a graduate of the Cherkasy Institute of Fire Safety named after Chornobyl Heroes of National University of Civil Defense of Ukraine wished his colleagues not to stop at the reached achievements and to continue the path of development, take care of the historical experience and continue to build the potential.

It is pleasant to note that Oleksandr Shmereho, the specialist of KFI, was awarded an honorary breastplate.