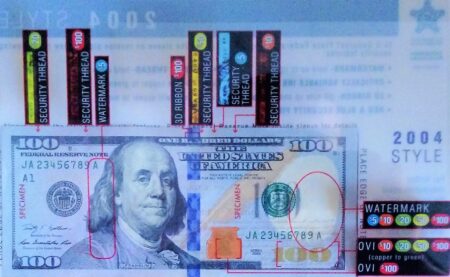 On October 28, 2021, representatives of the US Secret Service conducted training on the identification of counterfeit US banknotes. Experts attended the event from the Kyiv Scientific Research Institute of Forensic Expertise and its Regional Branches and representatives of the Department of Organization of Production and Protection of Money of the Money Circulation Department of the NBU.

The training consisted of two parts.

During the first part, the main characteristics of real US dollar banknotes were presented to the present experts. There were considered the peculiarities of banknote designs from 1929 to the present.

In the second part, experts examined the latest samples of counterfeit banknotes provided by the US Secret Service, which were found in the United States recently.

Representatives of the Secret Service also drew the participants’ attention to a significant discrepancy in the quality of forgeries. As an example, samples of forgeries made on a colour printer and forgeries of the “Luxury” class, made on industrial equipment, were provided.

In the end, the participants of the event discussed the problem of the circulation of counterfeits in both the United States and Ukraine. The position on the definition of counterfeiting, payment and processing of banknotes from the point of view of the US Secret Service was also clarified.