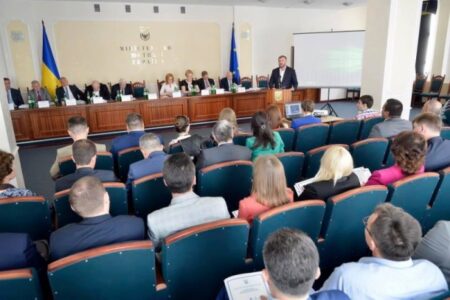 On May 25 the Ministry of Justice of Ukraine there was held a round-table devoted to the theme «The national legislation reforms in the light of European integration of Ukraine». Among the honorable speakers of this event the statements were presented by the Ministry of Justice of Ukraine Pavlo Petrenko, the Director of Kyiv Research Institute of Forensic Expertise Oleksandr Ruvin, the Director of the Legislation Institute of the Verchovna Rada of Ukraine Oleksandr Kopylenko, people’ deputies of Ukraine and leading scientists.

The organizers defined the main idea of the event as the creation of an open platform for discussing strategic issues of the development of national legislation, taking into account the new conditions of a modern democratic society and the movement of Ukraine towards the European standards of state administration.

«European integration is not only an open border, but foremost a movement towards European standards, a change in the approach and basic principles on which each state is based. The sole and the highest goal of public authority is a person and his rights and freedom. The Ministry of Justice over the past three years has made a significant step forward in approaching European standards of life. We have come a long way in realization an extremely ambitious plan for the implementation of Ukrainian legislation to get visa-free regime with the EU for Ukrainian citizens. It has been executed more than 150 items in the various spheres of regulatory. The Ministry of Justice, in particular, had more than 50 commitments, which were successfully implemented in record time and the work is still ongoing», – the Minister of Justice of Ukraine Pavlo Petrenko said in his welcoming speech and expressed his gratitude to all colleagues who joined the extremely complex and a successful way at the same time.

During statements the participants discussed pressing issues of the legislation, bringing the legislation into line with European standards in view of mentally and national feature of Ukrainian society. According to the speakers, the qualitative and quantitative aspects of reforming the legislative base should in an equal balance and lead to practical changes which will be felt by the citizens of our country.

«The topic of European experience is particular urgent in forensic science, because a national forensic expertise can not exist separately, out of the international community cooperation, – noted during the report the Director of Kyiv Research Institute of Forensic Expertise Oleksandr Ruvin, – Ukraine undertook to perform large-scale internal changes, including to conduct necessary reforms in forensic expertise and criminalistics. Forensic activity of the states should comply with national principles and international legal and professional standards. This strategic task to considerable extent depends on consolidation of efforts with the international colleagues».

The Director of Kyiv Research Institute of Forensic Expertise Oleksandr Ruvin during the speech told about the main achievements of the Institute in the area of the international cooperation, namely the membership of Kyiv Research Institute of Forensic Expertise in the European network of forensic institutions, acquainted the audience with the principles of work of ENFSI, with the structural divisions of the organization and outlined a number of possibilities and development of cooperation with European colleagues.

In the course of the event the speakers also raised topics of clear formulation of standards, the terms of their practical application and recognition by scientific community.

In general, the meeting allowed discussing topical issues of integration of European experience of forensic activity for the national institutions, to understand the problem aspects of the process and to find all possible ways of their solution for the future practical implementation.