Journalists of the Segodnya newspaper continued to issue a series of materials on the study of documents and handwriting, conducted by experts of Kyiv Scientific Research Institute of Forensic Expertise.

In a new publication, readers were told about the research of diplomas about graduating from higher educational institutions, receipts for a loan of money, fiscal and sales receipts, as well as biometric documents.

“One of the types of documents is a receipt for borrowing money. For example, one person took in another 200,000 UAH. In fact – 20,000 UAH … It is often corrected the type of currency, say, someone borrowed UAH, and finally it turned into dollars. It seems that a person borrowed $ 5,000 for 15 years. In fact, the dollar icon was added, that is, it took 5,000 UAH and for 5 years, not for 15 years, therefore, the percentages are different,” said Viktoriia Kulykovska, Head of the Questioned Document Examination Department of Kyiv Scientific Research Institute of Forensic Expertise.

Questioned document examination and handwriting examination have a lot of objects of research and questions that can be answered by experts who have specialized knowledge and work with high-class equipment.

“There was a difficult case when we examined a large number of documents with an almost perfect signature. And signatures were always the same! They have been made not by the printer, but by the handle. As a result, it was established that the professional artist forged the signatures with the help of a simple device that all students know about: a stool, glass, a lamp … And the artist’s hand never wavered! Moreover, referring to the Constitution, this suspect refused to provide the investigation with samples of his handwriting. Then they searched for his work, written 20 years ago when he entered the art institute, and determined the identity of the artist’s handwriting and the person who forged the documents, ” said Iryna Bilous, Head of the handwriting research department of Kyiv Scientific Research Institute of Forensic Expertise.

For a long time Prince Dolgorukiy was considered as the author of the letters, but the researchers of the Pushkin heritage did not agree with this conclusion.

In 1974, Kyiv Scientific Institute of Forensic Expertise conducted a second study of the letter. It was performed by the famous handwriting specialist Sofiia Abramivna Tsypeniuk. Unfortunately, this woman who brought up a generation of excellent handwriting experts, is no longer alive (she lived for more than 90 years and consulted colleagues at the institute until the last days). But there are those in Kyiv Scientific Research Institute of Forensic Expertise who worked with her who knew her and remember well.

Sofiia Abramivna began work with G. Bogachkin, an employee of the then central to the USSR Moscow Institute of Forensic Expertise. Two anonymous letters written in French were brought into the research. Letters were written once to the poet’s friends to Petersburg. For comparison, women experts received samples of the handwritings of Princes Dolgorukiy and Gagarin, but felt that this was not enough. They made a request to the archives of the Moscow Central Library handwriting samples of more than 100 young people of that era, from the same sectors of society, that is, from higher circles. One should be aware that Prince Dolgorukiy was only 19 years old at the time of writing the letters and Gagarin was a little more than 22 years old. There were three months of a thorough study of the samples. As a result, Sofiia Abramivna and her colleague found out that, in fact, the letters were not written in French, but in Russian. However, by age this author was much older than both of the princes mentioned above! Thus, experts found that the princes Dolgorukiy and Gagarin are not related to the death of Pushkin, as they themselves once claimed. It was someone else who wrote them.

PrevПопередняKyiv Scientific Research Institute of Forensic Expertise held a seminar “Corporate income tax: the practice of tax audits and options for solving problems posed to economic examination”
НаступнаExperts of Kyiv Scientific Research Institute of Forensic Expertise took part in the XX International Scientific and Practical Forum “Theory and Practice of the Development of the Agro-Industrial Complex and Rural Areas”Next 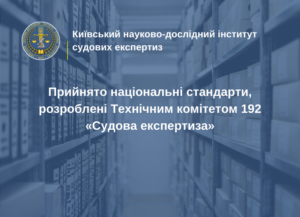