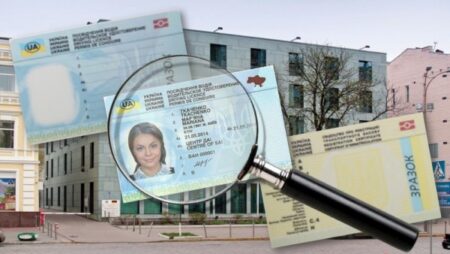 Serhii Naumenko, chief forensic expert of the Kyiv Scientific Research Institute of Forensic Expertise became a participant of the working meeting of police officers of the countries of the European Union.

The event was held at the Embassy of the Federal Republic of Germany in Ukraine with the participation of representatives of France, Romania, Austria, Great Britain and the United States of America.

A number of questions were raised on the agenda regarding the international interaction of experts during the study of plastic documents on vehicles and driver’s licenses. The relevant documents are intended for their long-term use and being in circulation. They contain certain information, transmit it in time and space and, as practice shows, often become objects of criminal offenses, and therefore become the objects of the forensic examination of documents.

Forensic expert Serhii Naumenko presented to foreign colleagues a presentation of the experience of conducting relevant documents’ research at the Kyiv Scientific Research Institute of Forensic Expertise as well as drew attention to the peculiarities of the study of plastic documents on vehicles and a domestic driver’s license.

“Today, we are aware of individual cases where fake Ukrainian documents are found in the countries of the European Union. Foreign citizens buy fake documents in Ukraine for their further use in their countries. In addition, there are cases when citizens fill out original driver’s licenses for one or two categories, and then these documents are amended and all categories are illegally opened,” said Serhii Naumenko.

With the development of technology, the emergence of modern devices for printing with high resolution and the ability to print on typographic devices, new ways of forging and falsifying documents management are emerging. To identify such documents becomes much more difficult and is possible only with the knowledge of experts and the ability to work with modern instrumentation.

In general, the meeting was successful and productive, the participants expressed gratitude to the representative of the Kyiv Scientific Research Institute of Forensic Expertise for the experience presented, emphasizing the relevance of the discussed topic as well as agreed on ways for further international cooperation in this area of work.