Oleksandr Shmereho, the expert of KFI, about regulatory legislative base and peculiarities of conducting forensic fire and technical expertise

To conduct of forensic fire and technical expertise is becoming more difficult. There are many difficulties in the process of research the formation of regulatory legislative base which the experts are solved. Oleksandr Shmereho, the Head of the Department for Labor Protection, Fire and Technical and Electrical Research of Kyiv Scientific Research Institute of Forensic Expertise in the interview with the journalist of “Pozhtekhbezpeka” (meaning “fire-fighting technical safety”) magazine spoke about the peculiarities of conducting forensic expertise and regulatory legislative base that needs to be modernized.

Recently the Institute hosted a section meeting of the forensic fire and technical expertise of the scientific and advisory and methodological council on the problems forensic expertise of the Ministry of Justice. Tell us, please, what they were talking about?

It dealt with the development, improvement, updating of regulatory legislative base which concerns the procedure of expert research while conducting forensic expertise and expert research. The General methodology of conducting of fire and technical expertise established in 2012 is in force today. The document defines the way in which forensic experts investigate fires’ occurrence and spread as well as compliance with fire safety requirements.

Recently a lot regulatory documents have appeared and some old ones have been canceled. For example, with the advent of the Code of Civil Protection, the law “On Fire Safety” has lost its force. To my mind it was a well written document. By the way, the provisions of the Code did not take into account a number of positive points that were regulated in the predecessor document. Today it complicates the work. For example, the investigation and other interested persons, who appoint forensic examinations, set before us the task, based on the old methodology. It is problematic to give exhaustive answer, since we must refer to certain provisions prescribed in the Law “On Fire Safety” which does not exist.

According to the new Code of Criminal Procedure there are no specialists in police unites on the study of fires, there are only explosive inspectors who must investigate the circumstances of fires in a certain way. They provide with full information about circumstances the investigator who carries out urgent investigative actions on the site of the fire. It should be noted that the explosions in most cases are closely related to the combustion process. The speed of flame is different, we must say. However, explosive specialists of police units deal exclusively with substances, explosive objects, and self-made devices in which detonators are present. They are not interested in other peculiarities. And this, you will agree, is harmful to the common cause, since in practice, the explosion, including a criminal one, can occur without the use of explosives and means of subversion. The damage caused are recognized according to the existing legislative factors, which can be much stronger, that with the use of explosives.

The old Code of Criminal Procedure determined the State Fire Inspection by the Body of inquiry and it was responsible for considering all the circumstances of emergencies – occurrence and spread of fires and compliance with fire safety requirements. At the same time plenipotentiaries who carried out the state supervision, could take procedural decisions to initiate criminal proceedings on the fact of fire, refuse to initiate it or transfer the case to another service. New Code of Criminal Procedure cancelled this process (in my opinion it was properly organized). Previously firefighters, extinguishing the flame, noted in the act the cause of the fire – the things that are obvious for them (when the cause of the fire is clear and is determined immediately). Today, due to influence of certain persons who created destructive in these issues, they add a mandatory definition of fire’s cause, even when they make an act about fire with definition “presumably”, if they were not accused of unprofessionalism or other mercantile aspirations, in my opinion). Therefore, I think it is necessary to make a number of changes to the General methodology, to improve some of the provisions, because in recent years a lot of new materials have been accumulated related to the investigation of fires.

What will the updated methodology contribute to?

First of all, the document will help experts determine clear guidelines: what and how to investigate on the site of fire and not only this. Since during the work are arising other issues (let’s say, the compliance of the firefighting state of the object with the current regulations, which, unfortunately, also have been changed and in my opinion, not for the better), the document should be flexible, foresee such changes or take them into account. It should also more clearly define the procedure for investigating the actions of fire and rescue unites during the fire extinguishing. After all, there are cases, when their non-professionalism leads to greater complications and losses than the fire itself. Today the work of firefighters experts are estimated keeping the old regulatory legislative acts which do not allow finding out the truth. Therefore, judges often have doubts about the correctness of the expertise itself. It is problematic to explain the controversial issues without clearly stipulated provisions in the General Methodology.

In addition, in the new version we are striving to lay down the norm following which the expert’s presence is mandatory, at least in resonant cases. I believe, the causes of the fire should be investigated “hotly”, when the firefighters had extinguished the flame. Then you can recognize the general picture and find out very important details. There is little information after the “clearing” the place of the emergency.

From my own experience I know that eyewitnesses’s testimonies can be useful only in the first minutes after the fire suppressing and they are true, I have more than once convinced myself of this.

Frankly speaking, at the last meeting of the Scientific and Advisory and Methodological Council of the Ministry of Justice of Ukraine some people opposed the changes in the current version of the General Methodology. For example, the representative of Kharkiv Scientific Research Institute of Forensic Expertise, namely the Head of the section of psychological forensic expertise, expressed disagreement with any changes. After the discussion, the representatives decided to prepare a new draft and submit it to the autumn session. Well, the term “improvement” was replaced by the term “updating”, the decision of the section was voted unanimously.

Let’s say, in the autumn session the draft of the General Methodology will be approved. What’s the next?

If the Ministry of Justice allocates funds for the development of the Methodology, and that is a very important condition, it will not be included to the Register of Methods of Forensic Expertise. After completion of the work we will test it, so to speak, in the field and will introduce it. During the research, experts will use the proposed methods, will do certain conclusions and will provide their proposals. On the basis of this we will draw up the necessary documents which will be reviewed and approved by the Scientific and Advisory and Methodological Council of the Ministry of Justice of Ukraine. The document will be added to the Unified State Register of Methods by the Ministry; it will receive the status of a legislative act. The main thing is the Ministry plans to fund (several hundred thousand UAH) for the development of the document. We hope that after several years of our persistent actions we will have a new version of the Methodology without which it is difficult to work today.

PrevПопередняCongratulations on the Day of Forensic Expert of Ukraine!
НаступнаKyiv Scientific Research Institute of Forensic Expertise continues cooperation with Dutch colleagues to investigate the shooting down of Malaysian Airlines flight MH17Next 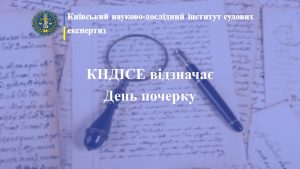