On December 15, 2021, the III International Scientific and Practical Conference “Current Issues of Forensic Expertology, Criminalistics and Criminal Procedure” was held. The event was held online, organized by the Kyiv Scientific Research Institute of Forensic Expertise.

This is the first event of such a large-scale event in Ukraine since independence, which gathered an unprecedented number of participants from the United States to Australia.

The participants of the conference represented all branches of government: legislative, executive and judicial. Distinguished representatives of various scientific, expert institutions and international institutions were also present.

Detailed information about the program, participants, topics of reports and video presentations can be viewed on the relevant page of the site of the Kyiv Scientific Research Institute of Forensic Expertise.

The conference was opened by:

Representatives of leading forensic experts, scientific institutions, educational institutions, and public authorities made reports. In total, 125 reports were submitted to the conference, covering almost all aspects of forensic science, criminology and criminal procedure.

Reports on drug research and the current state of the illicit drug market were presented by Pete Ausili, Chairman of the Committee on International Affairs of the American Academy of Forensic Science (AAFS); Sabina Gadirova, Head of the Department of Forensic Biological Expertise, Center for Forensic Examination of the Republic of Azerbaijan; Patvakan Voskanyan, Deputy Director for Scientific Work, National Bureau of Expertises of the Republic of Armenia.

Also during the conference were presented reports on economic, commodity, military, biological, trasological, construction and other types of research. In addition, the issues of peculiarities of appointment and conduct of forensic examinations both in Ukraine and in other countries of the world, forensic characteristics of certain types of crimes, issues of legislation in forensic activities and other topics were covered.

Kyiv Scientific Research Institute of Forensic Expertise thanks all those who participated in the III International Scientific and Practical Conference “Current Issues of Forensic Expertology, Criminalistics and Criminal Procedure” both with reports and as students. Despite the difficult situation in connection with the COVID-19 pandemic, the conference brought together a large number of participants from 25 countries and became the largest scientific conference in Ukraine.

The expert of the Kyiv Scientific Research Institute of Forensic Expertise became a participant in the international scientific and methodological seminar on the topic: “What should be the Methodology of expert research of industrial designs in Ukraine during the reform of legal protection of intellectual property objects?” 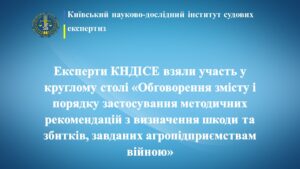 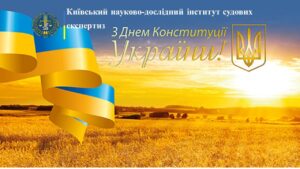