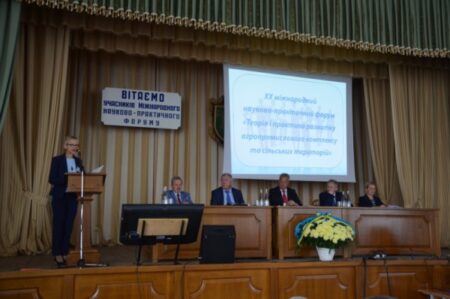 Representatives of Kyiv Scientific Research Institute of Forensic Expertise of the Ministry of Justice of Ukraine became participants in the XX International Scientific and Practical Forum “Theory and Practice of the Development of the Agro-Industrial Complex and Rural Territories”, which took place in Lviv region.

The jubilee forum was also attended by more than 400 representatives of domestic and foreign universities, scientific and expert institutions. The results of scientific research were presented by scientists from Poland, Turkey, Latvia, Lithuania, Belarus, and Moldova. The Ukrainian science at this forum was represented by scientists from more than 30 domestic universities and research institutions, representatives of about 10 government agencies and businesses, public organizations.

The topic of the reports covered the role and importance of soil science in the development of the social sphere of society, innovative models of managing elements of soil fertility, internationalization of scientific research.

In general, the participants’ work was carried out as part of eight scientific and practical conferences at the university faculties: