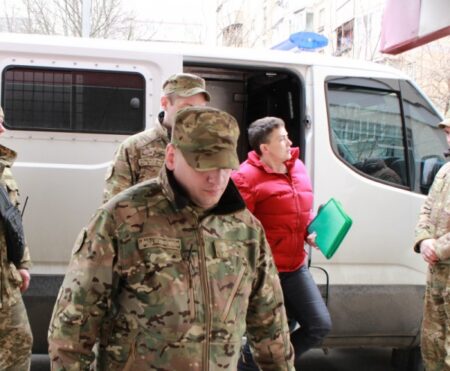 On April 5, 2018, People’s Deputy Nadiia Savchenko was in Kyiv Scientific Research Institute of Forensic Expertise by the decision of the investigator a forensic psychological investigation commission has been ordered with the use of a computer polygraph.

According to the order of Oleksandr Ruvin, the Director of KFI, and taking into account the complexity and resonance of the case for carrying out this examination was formed the commission of forensic experts of the Department of Psychological Research of Kyiv Scientific Research Institute of Forensic Expertise.

Yurii Irkhin, the Head of the Department of Psychological Research of KFI, said that the polygraph was not forcibly applied, that’s why it was natural that Nadiia Savchenko agreed, came to KFI and was initially ready to conduct this examination. However, during communication with the defender they had certain procedural issues: it turned out that there were procedural mismatches. Therefore, for today Nadiia Savchenko refused to conduct the examination with a computer polygraph. Thus, the research psychological part of the forensic examination took place, except the polygraph testing, which is impossible without the person’s voluntary consent.

Further, after agreeing on procedural issues, Nadiia Savchenko should once again take a decision on the consent to conduct an examination with the use of a polygraph.

During the psychological examination and the stay of Nadiia Savchenko at KFI, the Institute worked in a standard way. The access of citizens to the institution was complicated due to the considerable agitation of the representatives of the mass media to the event, so it was taken additional security measures. Currently all difficulties are resolved. Kyiv Scientific Research Institute of Forensic Expertise will continue to work on the staff schedule.