The needs of present Ukraine and the wide international experience of forensic psychological expertise create favorable conditions for effective implementation in forensic expertise of psychological assessment methods of the authenticity reported information with the use of a computer polygraph. Today more than 60 countries around the world use a polygraph to investigate crimes.

The leaders of countries, except the USA, in this area are Canada, Japan, China, Israel, Poland, India, Great Britain, El Salvador and Belgium.

European countries for decades have been showed negative approach to the introduction of a polygraph in forensic expert activity. However, in the second half of 90th the situation changed. Countries that traditionally rejected the possibility of a using a polygraph have introduced it in an active practice. These countries are the following: Switzerland, Germany, the Netherlands, Swiss and Norway. The courts in these countries in sentencing take into account the results of researches obtained with the use of a polygraph.

In forensic and law enforcement practice a polygraph is actively used by the countries which are bordering with Ukraine.

Forensic psychological examinations and expert researches with the use of a polygraph in Kyiv Research Institute of Forensic Expertise was established in 2015 on the basis of changes and additions made to the Instruction on the appointment and conduct of forensic examinations and expert researches approved by the Order of the Ministry of Justice of Ukraine.

Since then psychologists have been involved in conducting forensic psychological examinations with the use of a computer polygraph during the investigation, judicial settlement of offences in the following areas:

Most of the investigations, in which the said expertise was assigned, were characterized by the fact that the investigated events had been investigated under conditions of non-obviousness, for example, on the territory controlled by the separatists, where currently it is not possible to conduct legal proceedings; information that are in criminal proceedings is contradictory; evidence of the participants of the event is different. Such situations most of all require the conduct of forensic psychological examination with the use of a polygraph and allow to determine the degree of probability of information reported by the person; the completeness of information by a person due to the circumstances of the event under the investigation and so on.

The conducted examinations and expert researches formed the basis and research activity of the Institute. There has been planned and performed the theme “Forensic psychological expertise with the use of a computer polygraph” according to the thematic plan of the scientific and research work. 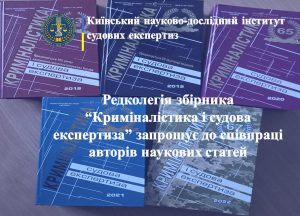 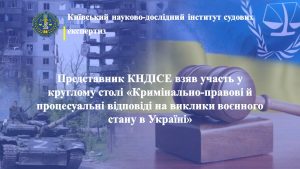 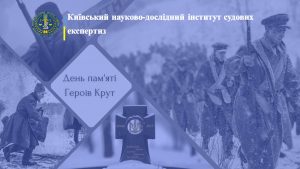