Concerning the investigation into the crash of the Boeing-737-800 plane of the “Ukraine International Airlines” company which took place on January 8, 2020 in the Islamic Republic of Iran 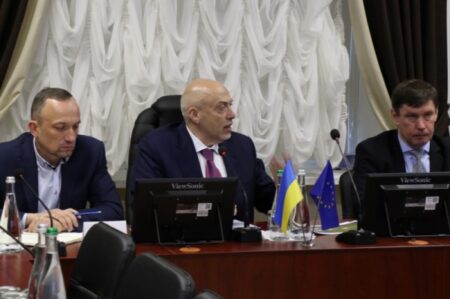 As part of the investigation into the crash of the Ukrainian Boeing 737-800 UR-PSR plane, representatives of the Iranian Civil Aviation Organization (CAO), headed by the Investigative Officer of the Islamic Republic of Iran (IRI), arrived in Kyiv on Tuesday, January 21.

Experts from Canada and France have also joined the expert group.

On January 22, the experts had the opportunity to get acquainted with the technical possibilities of reading information from the flight data recorders – the so-called “black boxes” – the Kyiv Scientific Research Institute of Forensic Expertise, the laboratory of the National Aviation University and the Research and Production Enterprise “Dyscovi Systemy”.

On the same day, Secretary of the National Security and Defense Council of Ukraine Oleksiy Danilov met with Ambassador Extraordinary and Plenipotentiary of the Islamic Republic of Iran to Ukraine Manouchekhr Moradi to discuss further cooperation between Ukraine and Iran in the investigation of the Ukrainian plane crash. Ambassador Extraordinary and Plenipotentiary of Ukraine to the Islamic Republic of Iran Serhiy Burdyliak participated in the meeting.

On Thursday, January 23, Mr. Danilov met with the Iranian commissioner of the plane crash investigation to discuss the issues of the expert group’s work.

During the meeting, Mr. Danilov emphasized the particular importance of the issue of receiving “black boxes” by Ukraine.

In his turn, the Iranian commissioner of the plane crash investigation said that the final decision on further handling with the flight data recorders would be made after the Iranian delegation reported to the country’s leadership on the results of the visit to Ukraine and under Article 26 of the Chicago Convention and Annex 13 to it.

The National Security and Defense Council Secretary of Ukraine emphasized Ukraine’s full technical readiness to provide the necessary range of works to analyze the “black boxes”.